At the heart of this admirable collection from pianist Clifford Lamb lies a pertinent question: Do we need another version of “Summertime”?

In general, you’d say “no.” In this case, the answer is “absolutely.”

George Gershwin’s classic American lullaby marries a mournful melody to comforting, slightly rueful lyrics; written in 1935, it has inspired more than 30,000 recordings, ranging across genres from blues to classical, in settings from solo voice to symphonic orchestra, comprising a rainbow of interpretations – which makes it all the more impressive to find a version that provides something different, as Lamb does here. His arrangement nods to the stormwind force of McCoy Tyner (whose music, along with that of Chick Corea and Herbie Hancock, lured Lamb to the jazz piano in the first place). But he has added a unique, juggernaut bass line, doubled by the redoubtable bass master Buster Williams; it finds its equal in Cindy Blackman Santana’s explosive drumming to shape a more urgent anthem for our own time, some 80 years after the song’s debut. The lyrics to “Summertime” contain a measured optimism as well as a lurking unease; Lamb’s arrangement paints both conditions in stark relief.

That bass line underscores Lamb’s approach to the piano, to jazz, and to music as a whole; he has studied the art of arranging since his college years at Berklee College of Music, and perfected it over the last decade, when he rededicated himself to music as a calling and a vocation. Lamb possesses superb technique, and the sure confidence to employ it only as needed on these tracks: no fireworks merely for fireworks’ sake. But it’s the arrangement of each song – the recasting of familiar works, through alterations in tempo, tonal color, and primarily harmony – that most distinguishes his approach, and he dedicates his technical prowess to that end.

The question I mentioned at the start is answered by each of the other standards Lamb has undertaken. Sometimes it manifests itself in the grand scheme of a song, as in “Summertime” as well a couple of the solo-piano tracks here: the rubato “My Funny Valentine,” on which he weaves a two-part invention, and “People,” where the melody gradually coalesces from its pointilistic opening. Elsewhere, the art of arrangement reveals itself in a small but telling detail, such as the closing moments of “O Grande Amor.” Lamb’s rendition of this bossa nova icon brims with lovely subtleties, but to me, one stands out – the glittery right-hand arpeggio at the end. It’s a little flourish of the sort first used by classical composers of the 18th century and later adapted by jazz musicians as a light exclamation point to an arrangement. But where most artists would end the performance right there, Lamb sustains the underlying left-hand chord, allowing it to decay naturally and returning the listener, however briefly, to the song’s trademark mixture of bitter and sweet – what the Brazilians call saudade. What might have been a cute gimmick becomes, instead, a momentary burst of sunlight that brightens the melancholia without dispelling it altogether.

Lamb also displays his sense of context – another aspect of the art of arrangement – on the two compositions he wrote; it shows up in the tempos he chooses, in the way he presents and reiterates his melodies, and in the ways he deploys his top-drawer collaborators. On the ballad “Martita,” named for a long-ago romance that, says Lamb, “taught me a great deal about life,” he splits the theme statement between piano and bass, spotlighting the dimensions of Williams’s lyrical, singing tone to convey the song’s depth of feeling. And the title track would be far the poorer without Blackman Santana’s remarkable balance of pummeling power and saving grace – a quality she also brings to “Smile,” arguably the most fully realized of these tracks in its fusion of all the elements at Lamb’s disposal.

Bridges is the first in a series of what we may call “cameo collections” from Lamb – short albums of a half-dozen or so tunes, constituting a digital-age version of the vinyl era’s EP (Extended Play) releases, which will arrive a few times per year. Under the watchful gaze of veteran producer Jeff Weber, it was recorded live to two-tracks, meaning no post-production tweaks, no “fixes” to what took place in the studio, no splicing or dicing. What you hear is what they played, which is something you’d only undertake with musicians of this caliber.

The title Bridges represents the purpose underlying not only this collection but also Lamb’s goal for his music. In addition to the legendary older artists whose work he absorbed, these tracks “were cultivated by virtue of listening to some of the newer players – players like [pianists] Jason Moran and Gerald Clayton, [bassist] Ben Williams, [trumpeter] Christian Scott. . . . The idea was to take elements from the more traditional sources and connect them to where I saw some of the younger players were heading.” For many artists stuck in their ways, such a transit might be unimaginable. But thanks to Lamb’s well-grounded musicality, this bridge requires no suspension of disbelief.

This site uses Akismet to reduce spam. Learn how your comment data is processed. 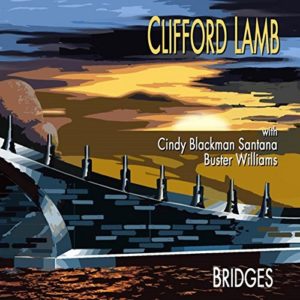